Vistry Group is demonstrating its support for the UK’s military services by sending a seven-strong team to Plymouth’s Armed Forces Day.

Vistry is a partner of the special day on Saturday, 25th June, which gives people in the city a chance to show their support and gratitude to the country’s servicemen and women.

Vistry has a proud tradition of backing the military and has publicly pledged to help and support veterans.

In October 2021 Vistry re-signed a pledge, known as the Armed Forces Covenant, to actively help members of the armed forces community. The pledge was signed by chief executive Greg Fitzgerald alongside Brigadier Peter Rowell.

The others taking part are Josh Harris and Lee Packer. The group will take part in the Veterans’ Village throughout the day.

The South West is a busy area for Vistry and the company employs a large number of ex-service personnel across its various sites in the region.

Sean said: “Taking part in Plymouth Armed Forces Day is a great opportunity for us to demonstrate our continuing commitment to the military community and those who have served their country.

“As a business we are always committed to support the communities in which we operate and the people who live in those communities, and that includes former military personnel and veterans.

“We are building a number of homes across Plymouth and the surrounding area and a large number of the people who currently work with us come from an ex-Forces background.

“Over many years we have seen how former military personnel can have a successful and rewarding career in the construction sector thanks in a large part to the skills and training they acquired while serving with the Armed Forces.

“There are over 180 different careers in the construction industry, and we are always keen to bring new talent and people into our business.

“An event like this is an opportunity to meet and inspire people who are looking for a change of direction or are planning to embark on a new career path.”

Vistry has a track record when it comes to supporting the military. Bovis Homes – which is part of the company – received a MOD Gold Award recognition in 2019 for a range of initiatives including offering employment to veterans and supporting people from the military community.

The company has more than 100 employees with ex-military backgrounds including site managers, technical staff and trainers. Vistry also offers discount schemes to help servicemen and women buy a home, including a discount off property prices.

Roger Morton, who served with the Royal Engineers, is group change director at Vistry and the housebuilder’s armed forces champion.

Roger said: “Vistry is delighted to be supporting Plymouth’s Armed Forces Day. Showing support to the armed forces community is important to us.

“We value the skills that former military personnel bring to our business and are lucky to count many military families as our customers.”

Plymouth Armed Forces Day is being held on Plymouth Hoe and coincides with the 40th anniversary of the liberation of the Falkland Islands.

The special day will include parades, displays, live music and demonstrations from all branches of the services including the Royal Marines.

The annual event is a unique opportunity for the public to show their support for the men and women who make up the Armed Forces community from troops who are currently on active service to reservists, veterans and the families of service personnel.

For more information on the event visit www.plymoutharmedforcesday.co.uk 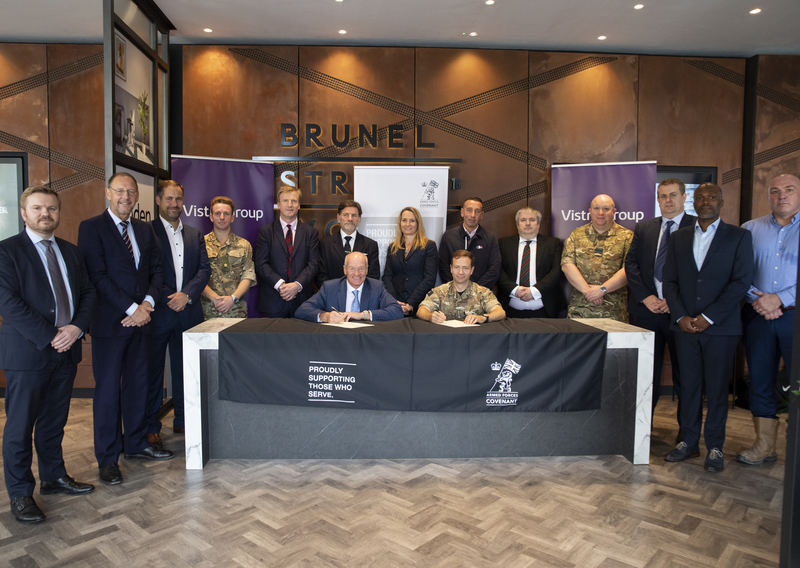